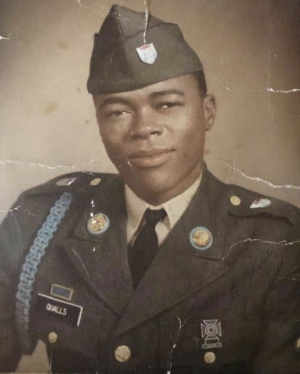 Jessie attended Leighton Training School and later enlisted in the United States Army at the age 16. Commander Qualls received the Combat Infantryman Badge, the Army Commendation Medal with V device for valor, the Vietnam Service Medal with three bronze stars, the Vietnam Cross of Gallantry, the National Defense Service Medal, the Purple Heart, and the Air Medal. Qualls was stationed at Fort Benning, Georgia, and then went to Korea with his unit and was there from 1960-61. Qualls was an automatic weapons squad leader with Bravo Company, 1st Battalion, 502nd Airborne Infantry Strike Force, 101st Airborne Division, from March 1965 until July 1966. He left the Army in 1968 as a Sergeant Jesse Qualls. His first job after the military was with Reynolds Aluminum in Sheffield. He later drove a tractor trailer for nearly 30 years. JEsie was a disc Jockey and was known as “Suntan Superman”.

Qualls was the commander of Veterans of Foreign Wars Post 8640 in Sheffield, AL. He facilitated the Vet to Vet PTSD group meetings at the Alabama VA hospitals. He was also the first Vice president of the Tri-county branch of the NAACP and he served as chairman of the state’s NAACP military and veterans affairs committee. He provided veteran’s updates, church schedules and church music monthly on WZZA AM-1410 in Tuscumbia. He was employed at TNT Fireworks as a security guard. He was the founder and president of Shoals area Travel Light Social Club.

Commander Jessie Frank Qualls will be truly missed. He was known all over the world. He also wanted to help any anyone in need especially the veterans. The love and support that he shared for his family, friends and many communities will be cherished locally, regionally, and nationally.

To send flowers to the family or plant a tree in memory of Jessie Frank Qualls, please visit our floral store.