Christopher Mayes knew at the age of 3 that he wanted to be a part of the funeral home business.

His father was pastor of First Baptist Church in Leighton. When there were funerals at the church, Mayes would observe the ceremonies and occasionally ride in the hearse.

"I told my parents that's what I wanted to do when I grew up," Mayes said.

The aspiration for young Mayes turned into a dream come true. Mayes, 30, is the president and funeral director of his own business, Trinity Memorial Funeral Home, in Muscle Shoals and Florence.

Mayes grew up in Muscle Shoals and now resides in Florence. He said he unofficially started working in the funeral business at age 11.

"Ever since I was 11, I've basically been working in some kind of funeral home," Mayes said.

Charles Nelson, a funeral director for Trinity Memorial, said he has known Mayes since he was a child.

"He and my son, Corey, started working under me at Thompson and Son Funeral Home," Nelson said. "He has learned the profession and is putting those skills and what he has learned to the test. He tries to do the right thing, and I'm proud of him."

Mayes said what makes him enjoy his job the most is working with families and getting them through their time of grieving.

"I am a people person," he said. "I like helping people."

Mayes opened Trinity Memorial in Muscle Shoals in December 2004 and his Florence location in December.

Mayes said he has plans to renovate the Muscle Shoals location and maybe expand his business to Athens or Decatur.

Mayes said that typically, people who use his funeral home's services will call him, or the hospital or nursing home will call, and then the funeral home will schedule a time for the family to come in and make arrangements for their loved one.

"We go through bereavement training so we can talk to them to help them understand death better," he said. "The majority of people really appreciate the fact that we assist them with anything and any desire they have in their situation."

Mayes said it can be difficult to constantly deal with death, but his focus is on being sensitive and understanding.

"I try to put myself in their shoes," he said. "It makes you look at life differently and makes you appreciate life."

In his job, Mayes makes death calls, arranges the funerals, handles general operations of the business and works with the family.

When he's not working at Trinity, Mayes is either spending time with his family or he's working with his church, Little Zion Missionary Baptist in Florence.

Mayes serves as the full-time pastor at the church and has been there for five years.

In his free time, Mayes enjoys watching college football and basketball, and he also plays the piano, organ and drums.

In his job with the funeral home, Mayes said it can often take a lot out of him, but it's worth it to be able to help families through one of their most sensitive times.

"It takes a lot of patience, and you have to love people," he said. "People say to me that they couldn't have made it without our help. That makes me feel good."

Kenda Williams can be reached at 740-5720 or kenda.williams@timesdaily.com. 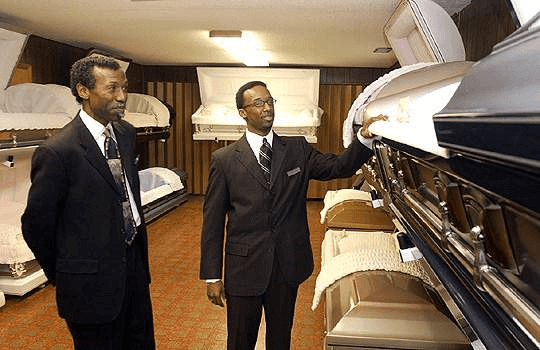